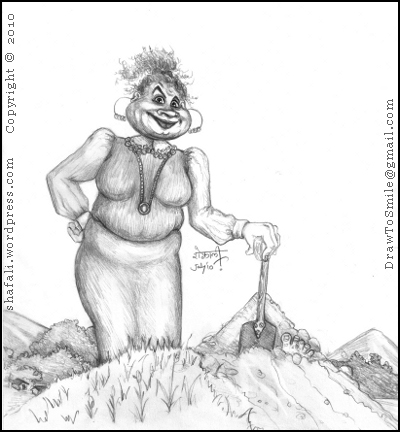 In response to Shafali’s Caricature carnival over at http://shafali.wordpress.com/2010/07/01/announcement-story-in-the-caricature-a-story-writing-blog-carnival/ I have created a little tale…..

Maude paused, wiping the sweat from her forehead, her brightly coloured beaded earrrings jingling wildly. She leaned on her spade and smiled with satisfaction.

“You’ll never make a decent gardener if you don’t put in the spade work,” he’d said, his red moon-face pushed close to hers. “And never if you dress like that! Look at those stupid earrings!”

She wondered how she’d ever found him attractive; perhaps it was his parsnips….

Well, look at me now, she thought. He should never have told me about the secrets to growing award-winning asparagus.

“Folk-lore,” he’d declared pompously, “dictates that the best asparagus beds must have a body buried in them. Feed the roots properly. But you, you’ll never grow anything but more fat.”

His sneering voice seemed to touch something primeval inside and that was when she discovered the true meaning of spadework. A single smart blow to the back of his balding head had ended those sneering put-downs forever, and the spade was very useful for digging the new asparagus bed. It had taken a while; perhaps she should have got him to do that before she’d been creative with her spade. Getting him into the hole wasn’t easy either; he was hardly a lightweight himself.

“Pot, kettle, black,” she’d muttered as she heaved him into the hole. It wasn’t quite deep enough but that foot peering out would soon be stripped to the bone by ants and then the corpse would settle deeper into the bed.

In any case, the newly planted asparagus spears would soon hide any untoward sights, but Maude’s eyes were firmly planted on the prospect of the bright red rosette at the Horticultural Show later that year, and she turned away before she saw the muddy toes twitch and wriggle and a cascade of soil rolled down the mound……

14 thoughts on “Come into the Garden, Maude…”