Synchronicity and going off the map.

Life as a journey is a bit of a cliché, really. I said once, “If life is a journey, then any short-cut is a death trap,” and I stand by it. My own journey has been an odd one. A long time ago, I looked at the metaphysical map and I saw that at the margins, around the edges, away from the established paths and well-known routes, there were areas marked “Here be dragons,” and I thought, I’d like see dragons. Ever since then, I’ve made forays into those areas of the maps that the map-makers couldn’t fill in properly because too few people had been out and explored them and come back with useful information. Most came back babbling about strange things they didn’t quite have the language for, and travellers’ tales that defy belief and rational understanding.

About ten years ago, I really set off in earnest, leaving behind any adherence to defined paths. You cannot step off a path without stepping off it, if you know what I mean. Real adventures do not come with a guarantee of ever coming home, or of safety or security. It’s hard to explain why I did it; I imagine that you’ll either understand or you won’t. I could talk about calling, vocation, daemon, destiny until the cows come home. Initially there were constant signs and hints and hunches and intuitions. I’ve long had an affinity for the phenomenon known as synchronicity. A week or so ago I finished a book on it, which irritated me. Synchronicity by Chris Mackie was heavily hyped as being a guide to synchronous living, but the author had become bogged down by a fascination with the phenomenon itself (despite being warned in no uncertain terms in a synchronous meeting with someone who really understood the matter) and lost his grip on the purpose of synchronicity for him. It’s absurdly easy to become fixated on the method of delivery rather than on the message itself, because it’s one of the things that can be mind-blowing when you first encounter it. There’s a saying that when a wise man points at the moon, a fool looks at the finger.

As my exploration took me further and further from known landmarks, I have been obliged to rely on my own inner compass. I have a decent sense of direction, not infallible, but solid enough for most things. But like any explorer, you need to get your bearings, take soundings and check from time to time that you’re not going the wrong way. Once you leave the beaten path, finding signposts is unlikely. You have to start relying on other senses, and other knowings. Sometimes you see traces of someone who’s gone ahead of you, a bent twig, Indian-fashion, a note left in a tree-hollow, cairns of stones carried up mountains by other pilgrims who’ve gone this way. On occasion, you see the bones of those who have died en route.

The further you go, the fewer the signs are until you can find, as I did, you are in a wilderness, a barren, mountainous land and there is no evidence that anyone else has ever come this way. There’s no obvious way to proceed, and when you stop to rest, you lose all sense of direction.

This is what happened to me. It began about five years ago, this nagging sense of unease and of disquiet. The questions began, and so did the doubts and then the fears. It’s reached desperation point, painful and unpleasant. What if I’ve gone the wrong way? What if all I have been exploring is a waste of time and energy? What if all my cherished beliefs and principles are all moonshine and bullshit? Should I go back? Should I give up and die, here, amid the empty lands, the wastelands?

Round and round the questions fly, never letting up, never letting me just move on. I read last year of Jung’s descent into his own personal hell, of a breakdown that became his breakthrough, and his insight that he had to do something and it didn’t matter what. His explorations using active imaginations started from mundane things, and no matter how humble the starting point, each led him deeper into the matters of true importance. I did a fair bit of active imagination work last year and yet, I have still found myself asking, am I doing the right thing, am I going the right way?

The problem is there is no one to ask, who is able to give me a clear subjective answer from a point of understanding, of having been to the same places I’ve been. Jung recommended working closely with someone who has been through the same sort of journey, and while I have good friends in the same line of exploration, they’re all folks who live half a world away, and whose kindness I could not presume upon, except as an occasional event.

So I am alone in the wasteland, unable to proceed because of fear that I am going the wrong way (which then brings with it the whole host of agonising extras, like has my entire life been a waste, and other such delights). I’ve recorded and worked with dreams, journaled, painted, drawn, meditated, played, sat in nature, done everything from the mundane to the ridiculous and yet, I am so bogged down by doubts and fears that I cannot move.

Then yesterday I went somewhere. It’s a place I’ve never been to, despite growing up not far away, and driving through the dank winter fields of Cambridgeshire, with the vast skies and the tiny winding roads hemmed in by hedges, past tiny stone built churches that date back eight hundred years and more, amid villages that have dwindled to almost nothing.

There was a pair of buzzards calling when we got out of the car, and bird song that held the first notes of spring, though it was still early January. The ground was wet as an old bath sponge, rich with moss and algae, and the unprepossessing facade of the church did not hold much promise. 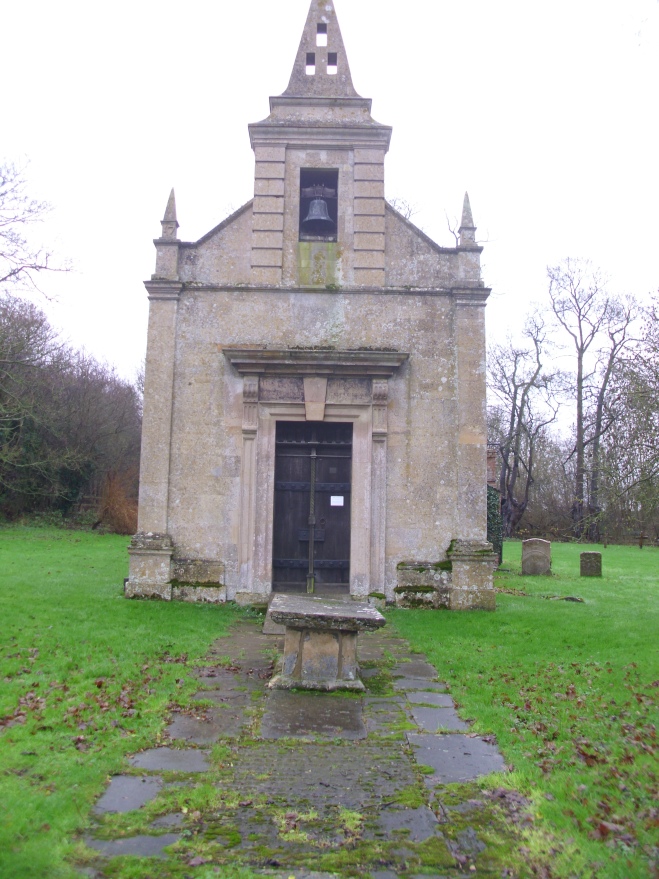 Inside, it felt more like a college chapel, with pews face to face rather than facing the altar. I walked round, feeling the stillness, the moment of time that seems held like a drop of amber that holds millennia within its shining core. I took photos, I read the embroidered banners. There is a small room just off the sanctuary, a vestry originally but now a sort of inner room. I went in and looked up in shock at the window. Vivid stained glass, quite old, but simple and striking. One side held a quartered circle, a cross made of ears of wheat, in coloured glass; the other side, in another roundel of glass, some words:

11 thoughts on “Synchronicity and going off the map.”