Why I am self-published

Recently the whole self-published versus traditionally published wrestling match has reignited, following a post by Ros Barber in the Guardian online. I’m not going to address the article because that would be juvenile, petty and a waste of time. More than that, it would only be my opinion and that is of little real worth. I am no one of note, or of influence. I’m an author who self-published, which makes me mud on the shoes of many.

In the 90’s I spent a couple of years going through the rigmarole of jumping through the hoops set by publishers and agents. Combined with an absurdly low income at the time that meant affording printer paper and postage was a big deal, the whole time was intensely stressful. I got asked for full manuscripts many times, and some went through several readers and editors at major publishing houses. The fore-runner to Square Peg got to committee stage at one of the Big Six. They asked me to rewrite certain parts; I was about to sit down to start that when the worst headache on the planet descended on me and put a stop to it. I was rushed to hospital with a brain haemorrhage. After I recovered enough from that to carry on writing, I did what they’d asked with the book, sent it in and waited. A few weeks later, the Dear John letter arrived. Blah blah blah. It boiled down to this: we like it but you’re an unknown and we can’t quite take the risk if we don’t love it enough to have its babies. So, knowing the whole process had almost killed me, I quit. I quit writing altogether.

In 2003 I began writing again after a gap of eight years, because a novel was forcing its way out of me; rather than burst open like one of Ripley’s shipmates, I gave in and wrote the damned thing (it was The Bet, for what that’s worth) and was faced with being back on the submissions treadmill all over again. The explosion of creative expression I experienced (I can’t quite say enjoyed because it was so compulsive) lasted for three years and in that time I had a lot of feedback from publishers and agents telling me I was almost there, send us the next one, over and over again. I even had an agent (turned out to be less use than a chocolate fireguard). But nothing ever went the whole distance, not even the novel that kept an editor at Random up all night to finish. It always ended in the same way: you’re good, very good, but you haven’t yet written a book we think will be a break-out success, keep on sending us stuff and we’ll keep reading.

There comes a moment where your entire being says: Oh just fuck right off, and when you’ve got there, fuck off even further and keep on fucking off until you’re a speck on the horizon, and then fuck off some more.

That’s what mine started saying. Letting someone else, some other entity or organisation, hold you so firmly in the palm of their sweaty little mitt, that you cannot move, do anything, because they hold you so tightly in their thrall, is beyond BAD for the soul. It’s toxic, corrosive and suffocating. Publishers have authors exactly where they want them: bent over, subjugated and submissive. There’s always the awareness that if you, the author, don’t do what they ask, there’s hundreds if not thousands of other authors panting and eager to take your place. You, the author, are not a real living human being: you are a content provider, nothing more.

So I stepped away. I took back my dreams and my hopes and my soul, and I walked away. At that stage, self-publishing was in its infancy and I had no idea really that it existed. I equated it with vanity publishing. Some still do, and indeed, there are numerous so-called small presses that are really vanity presses. I came to self-publishing at the behest of someone else who offered themselves as a helper who would do it for me. That’s one of the reasons why now I find it difficult to trust anyone, because that aspect didn’t end well. It could have ended much worse, but I dusted myself off and got on with it myself, learning as I went. I made mistakes for sure, but I’d begun.

Since then, I have put out quite a number of books: four novels, a novella, two collections of short stories, a collection of essays on depression, a poetry collection and a little paperback of guided meditations. I have had many thousands of readers, some of whom read everything and buy it in both e-version and in paperback. Had I kept on plugging away at submitting to publishers that would not have happened. I would either be dead (probably by my own hand) or locked away wearing a fetching jacket fastened at the back. Publishing is a business; it’s primarily about the money; it doesn’t care that the Dear John letters can destroy someone, for a day or for all eternity. It’s a business transaction to them, nothing more. If a book isn’t going to have a good chance of making money, they don’t take it on, no matter their personal liking for a story. That way leads to losing your job. An author whose first book doesn’t earn out the advance rarely gets a second book through. Once, they might have had three or four books published, to build an audience, but now, you have six months MAXIMUM to make that first book a success.

I self-published because it was the way forward for me, because the road to legacy publishing was policed by entities that make Procrustes look like the perfect gracious host, and because I do not regard myself as a content provider or my books as products. Every book or poem I write is a glimpse of a world inside my head; it exists somewhere beyond this existence and being able to share it with others is a privilege denied to me and you by traditional paths to publishing.

With fragrance and colour,

Of all who pass.

Wilt at the edges

Wait to be thrown out,

Sends out snakes of root

White and thin and hairy,

An ache for light.

Message in a bottle

On Friday I managed to tick off an item on my bucket list. Except I don’t have a bucket list, but you know what I mean: a much cherished hope, dream or ambition. For some my little tick would seem a bit tame but for a book lover or any author, it was a real thrill. I went to a bookshop. Not just any bookshop but a world famous bookshop.

Shakespeare & Company in Paris, less than fifty yards from Notre Dame cathedral has been on my personal radar for some years now. Working in Paris several times a year for umpty-ump years, I’ve never had any personal free time where I’ve felt it was possible to slip away for half an hour. Not even for five minutes to just take a photo and look longingly at the window like a kid at a sweet shop.

But last Friday I did. I managed it. You aren’t allowed to take photos inside so I must tantalise you with a shot or two of the exterior. 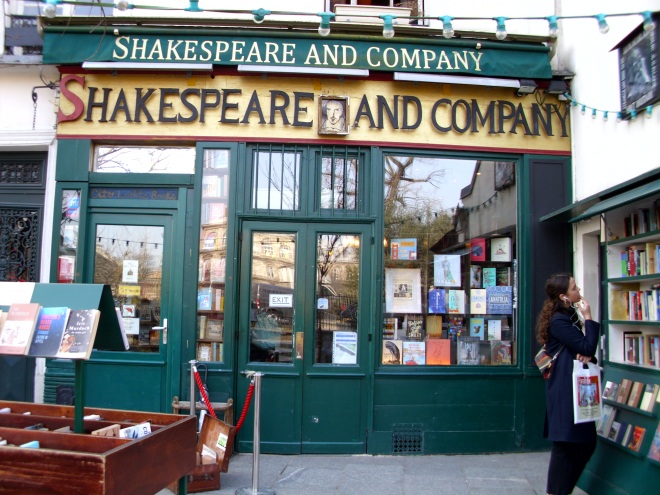 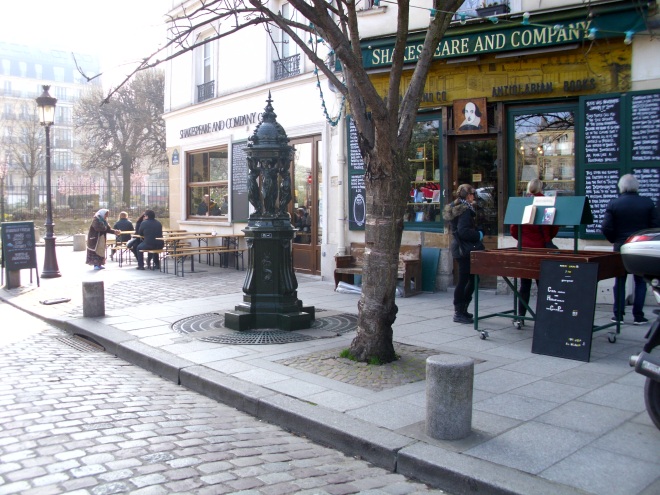 They have a Lucky Dip selection where for five euros you can buy a book, sight unseen, boxed neatly in a cardboard box with their famous stamp on it. Books are more expensive in France than in the UK, so taking a risk for a small sum was all right. Alas, my Lucky Dip was not (for me) lucky, as I got a James Joyce.

But I went in and had a browse. Floor to ceiling shelving, slightly dishevelled by the number of customers who have taken books out and put them back only to pounce on the next offering, and the lovely smell of books old and new: paradise. I heard customers asking for specific books: “Do you have a copy of The Prophet?” “Yes, I believe we do!” “I’m looking for The Bell Jar…” I catch the eye of the assistant and ask sotto voce, “Do you supply it with Prozac?” and she giggles discreetly as she goes to help the customer find it.

I looked, and found I was overwhelmed by the sheer mass of brilliance, of skill with words and with ideas, of the authors whose works surrounded me. I wanted to buy a book, a proper book, something I’d never normally find. Something different. After only a tiny bit of scanning of shelves I found a novel by George Sand, a little known work called Laura: the Journey into the Crystal. I had only a very short time to decide, so I bought it and the Lucky Dip and returned to my working day.

Yet a part of me remained with those shelves of books, those repositories of voices, some long, long dead. It made me realise my own voice was there, too, somewhere, on the shelves of those who have bought my books, and on the virtual shelves. George Sand would not have imagined that her books would still be being read more than two hundred years after her birth; she would surely have been delighted to see a modern woman seizing with delight one of her lesser known books.

My books are my messages in bottles, cast into the vast ocean of literature. Where they end up, I will never know. I’d like to think that they will pitch up somewhere rather than sink to the bottom of the sea. The act of casting a message in a bottle into the sea is an act of faith, and for the finder, an act of grace.

Perhaps I need a little more faith to keep chucking them out there, and believe that they may wash up on the right beaches, one day.