Tales of the Wellspring 5 ~ the White Spring of Glastonbury

The first time I visited the White Spring, the truth is I didn’t know its significance or meaning but I think I might have sensed something, for the place made a huge impression in my memory. Set at the foot of the Tor in Glastonbury, the building itself was once a reservoir for water for the town, filling from one of the two springs that well up from the earth there. The Red Spring, on the other side of the road, is now surrounded by the beautiful gardens of the Chalice Well trust, though an outlet in the lane means anyone can collect the water at any time of day or night. The Chalice Well is where Joseph of Arimathea is said to have concealed the cup of Christ and the waters run red to this day. The water is high in iron and has long been drunk as a health cure; miracles have been ascribed to it. (it appears briefly at the end of Strangers and Pilgrims too)

But the White Spring has been the poor relation of this famous wellspring. When I first visited, the building had been converted into a cafe, with a few tiny shops selling themed gifts. Water ran through the stone floor in a channel and on a hot day, such as the one we first went, not far off twenty years ago, dangling your feet in the cool refreshing water was a treat as you ate and drank. A couple of small shrines peppered the edges of the cafe, and candles and incense burned, but it was still only a cafe.

When I visited again in future years, it was shut. I found out the cafe had closed down, and the building was locked up and deserted, though people did still congregate in the tiny garden, where the water ran from a pipe outlet from the spring. On our first visit, there had been a man in this garden, who had with him wild creatures who stayed with him for love of him: an owl, a fox and a stoat, I believe. I never saw him; someone on the camp-site said he was there but by the time I got there, he was gone.

Each time I’ve been back, I’ve gone to look, a feeling of longing and sadness tugging my heart as I find it locked and silent.

But this time, it was not.

I’d known from reading their website that the spring was now open again, though the hours depended entirely on volunteers. I’d forgotten to check when it would be open before we headed to Glastonbury for a four day silent retreat. Serendipity was on my side that day, though. We’d been up to the top of the Tor, where the wind made me giddy and dizzy, and we took the shortly route down and found ourselves in Well House Lane, to find the White Spring was open.

There’s a notice as you go in, informing you of the no photos or filming rule, and various other guidelines. I’m glad you can’t take pictures because it would be intrusive and it might well undermine the breath-taking atmosphere of the place.

And I do mean breath-taking. When I came out, I had to remind myself that the building was just an old reservoir tank, built for nothing more than holding clean fresh spring water. You walk in, down some steps, and are transported to…somewhere else. It feels like an ancient temple or cave, the air filled with the scent of water, incense, candles and damp stones, echoing to the murmur of whispers and of water trickling. Candles burn on every surface, the reflections of the flames twinkling in the water of the pools. For there are several pools, including one huge deep one that (I believe) is about four feet six inches deep. You are allowed to bathe but you must inform the guardian first. If you bathe naked, you must be considerate of other visitors. One woman went in fully clothed, and with great dignity; I lacked the courage to do so. Shrines abound, to various deities, but mostly to the Mother, in her many guises.

A woman sobbed next to me as she made an offering in front of of a small shrine to a goddess figure I was sure was for child-bearing. Her partner comforted her silently, with a hand on her shoulder. People spoke, but in hushed respectful voices, and did not linger. You could not linger. The power was too overwhelming, emanating from the flow of the waters and the voices just below the threshold of hearing.

I emerged, blinking hard, into the bright sunlight of the lane, my face wet from my scanty baptism of hands splashed over face and head and heart, and took a long drink from the water spilling endlessly from the pipe on the outside of the well-house. There was refreshment and a tiny restoration; that I could sense a something here, though I could not easily name or quantify it, is a step forward, even if only a tiny one. 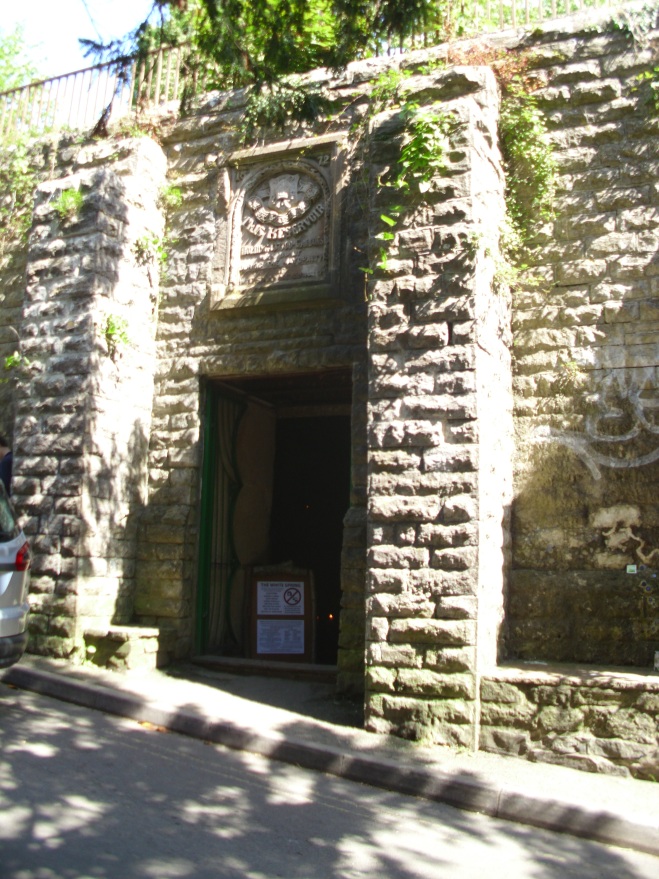 Lammas at the Cave

The morning birdsong is over by the time I leave the cave; I have not had the energy to rise at dawn to see the sun rise as I should. I have slept in, lying on top of my bed-roll most of the night, for though the cave is cool, the nights have been humid, sticky and oppressive. It has been difficult to get anything done, for movement other than the most languid kind leaves me exhausted and sweating.

Cooler air greets me, laden with the scents rising from the forest below, redolent of the soft rain that fell last night, and of green growth and flowers and a hint of ripeness. I do not farm up here, so there are no grain crops to gather in, but other things are coming to the point of harvest. A willow basket is hooked over my arm as I head slowly down the path that leads steeply down from the ledge where I live. I do not know what I am going to gather, but it seems to me that I should take a basket just in case. For what seems like the longest time, I have lost interest in my home and my life; though I know the forest to be coloured with the most vivid of shades and hues, all I have been able to see has been an endless mass of greys.

Under the canopy of trees, the path is dark and were it not for the white rocks placed at the edges here and there, I might easily wander. That’s dangerous, for on my mountain there are precipitous drops that you can’t see till you are almost falling over them. It’s not a place for careless meanderings, yet again today I let my feet guide me, not my mind, and I find myself at the stream that tumbles down the side of the mountain. The path follows this, and the air is heavy with the cool moisture and the song of the stream.

I have to tread carefully for the path is narrow and hard on the feet, sometimes becoming slippery and I wish I had not come this way; I consider turning back. But I trudge on, shouldering the empty basket, tripping sometimes, which leaves me breathless with shock and fear. Eventually, the ground levels out, and I find myself somewhere I have no memory of having been before. A great basin of rock, wide and deep, opens out for many yards and the stream fills it before leaving at the far end, the water draining away in a series of beautiful little waterfalls no more than five or six feet in height. The noise of falling water is deafening, yet I do not move onwards. I put the basket down and find somewhere to sit, cushioned by lush moss, and dangle my sore feet into the water.

It’s icy and refreshing, and I realise I am sweating with the effort and with the heat, for the sun is now high overhead. I had not felt how time was passing, and passing so swiftly, that my morning is gone. The water is inviting, so I strip off my clothes and slide in, gasping with the shock of the cold. The pool is deep enough to swim in, though if I put my feet down, I touch the rock. I swim for a little while before dressing again, and sit back on my mossy seat, damp and chilled and panting. I do not want to leave here, either to go back or to go onwards. Despite the noise of the water, it’s a very peaceful place.

A dash of brightness catches my eye, flashing past and dipping into the water, a brief vision of intense, shining blue that reappears on the far side of the pool, its beak full of a silver wriggling fish that disappears down its gullet with little difficulty. I search my memory for a name: kingfisher. I watch it dive for another, and another, and the fierce, brilliant colours are like lightning in the night of my mind. Then, full of fish, it flashes away downstream, out of sight and I am left alone.

When I come to pick up my basket, to my surprise it is full of fish. Much larger than the ones the kingfisher was catching, these are salmon and trout, and they remind me that if I do not grow grain here, I must still eat in winter, and I lug the basket back to the cave where they can be prepared for drying and smoking.

As the sun sets, I sit out at my fire, and eat freshly roasted salmon, burning my fingers a little as I pick pink flesh off the bones, and feel the blessing of the fisher of kings.