Tales of the Well-Spring 6 – returning to Source

“Time like an ever-rolling stream bears all its sons away” says the old hymn.

And its daughters too, though we still seem to be seldom mentioned, despite being, on average, a good fifty per cent of the world’s human population.

Whatever your gender, time is an inescapable force, and no matter how you resist, it passes, slipping through your fingers like water, and you find yourself saying things like, “I can’t believe it’s so many years since…”

A lifetime ago, really, yet the memories were unfading, holding my heart in ways that you’d not imagine a single week could. I found the photos shortly before we set off; was I ever that young, really? I’d gone in a highly stressful time in my life; we were about to set off for a new life (I’d have called it an adventure back then but the reality proved to be quite crippling for me, in so many ways) and we’d left keys to our house with the estate agents, hoping they’d sell it before we got back. I’ve written about that visit here. If you’ve read that post, then you’ll know what stayed with me most was the chapel of the well-spring: a little wooden structure built over an actual spring that was directed into a shallow stone trough. You could feel something even before you saw the water or stepped beneath the shingled roof of the shrine; a presence, a sense of the numinous, something otherworldly and deep.

I longed to see it again.

So when the chance return came up, that small corner was uppermost in my mind. I wanted to go back, to see if anything of the faith I’d held then remained, by stepping back to that time. You can read more of the history of Taizé anywhere, but to sum up, it was founded after the second world war by Brother Roger, to be a place for peace and reconciliation, especially devoted to the young people of the world. Visitors between the ages of 15 and 29 come from all over the globe to spend a week or sometimes longer, staying for a year as volunteers, to live in community, to pray three times a day and to have a chance to discover who they are. Brother Roger was one of the few people I have seen who carried with them a visible light, not unlike the depictions of medieval saints with haloes. He was stabbed to death in his own church in 2005, a killing that shocked the world and which rocked the community to its core.

We travelled through the night, arriving in Taizé in time for breakfast. By the time our group had all put up our tents and begun to settle, we were honoured by a visit from Archbishop John Sentamu, current archbishop of York, who’d brought a good 300 or so young people from York diocese. His last day of pilgrimage was our first.

But I held off from going to find the chapel until after evening prayer that day, slipping out at the end to avoid the crowds. I found the building easily enough, but I knew from a distance something was different.

Something was wrong. Terribly wrong. 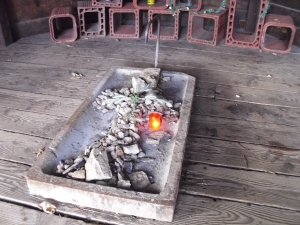 The trough was dry, and clearly had not held water in a long time. An arrangement of stones in the shape of a cross made it look more like a tomb than a basin for a spring. I could feel nothing, nothing at all. I screwed up my courage, and tried not to cry, but by the time I got back to my tent, my eyes had begun to leak and it felt like my heart was going to burst. I wondered briefly if the York coaches had already gone, or whether I could hitch a ride at least as far as London. There was no one I could talk to, about how devastated I felt, and no way of explaining why this had been important to me, so I told myself, Suck it up, Buttercup, stuffed all the sadness back down and decided to get on with the week as best I could.

But the travelling, and the tiredness, and the extreme heat, and all the extra walking and standing and lifting had rendered my body  in such pain, that sleep the first night was sporadic and uncomfortable. It was a few minutes walk to the nearest bathrooms, and in the middle of the night, that’s difficult. The first full day was quiet torment and the second not much better. Every muscle and joint in my body hurt; and my spirit was crushed and broken. I had no confidence, and no feeling about why I was there. I felt lost.

I managed to ask one of the brothers about what happened to the wellspring and was told that the water table was very low, and something had broken and had not been fixed. He didn’t seem to understand why it might be important. I could not begin to explain why a well-spring might not be a mere metaphor or a symbol, but a real, living exemplar of the connection between land and spirit. But there was something else. When we had first visited, there was a quarry being worked just beyond the then-boundaries of the site. At some point in the intervening years, the quarry had been worked out and had been landscaped to make it into something different; half way down the precipitous sides of the hill, was a spring (St. Stephen/ St Etienne’s spring, also known as La Source). Partly controlled by mechanisms that would hold back the flow in a well-head, the spring water cascaded down the rocks, and into a large pool filled with carp and goldfish, and then into a larger lake beyond. The whole area was devoted to silent prayer and stillness.

It was also a long way down when your body is screaming that it needs rest; steep paths or even steeper flights of steps wound their way down. I made it down on the second day. It was some comfort that a spring still flowed, even if it were not the one close to the church in the midst of the community; I felt a tiny lift in my heart as I saw the silent rising of the fish. 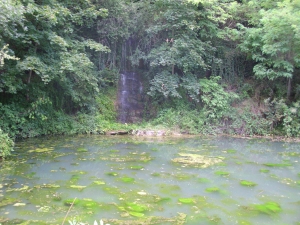 That night, I took some pain killers, knowing I could not face another night of broken, poor sleep, and I woke around 3am, having slept a few hours, needing to go to the loo. I trudged off, torch in hand. But on my return, something changed. The skies were very clear, and the moon was almost full. On that open hill in Burgundy, there was little light pollution and the moon and the stars were brilliant, shining with a luminous unearthly light. The whole place was very still; a night wind riffling through the trees and the crickets were singing, all at once, very very loudly, as a few wisps of cloud cleared from the face of the moon. Thousands upon thousands of crickets sang, and it seemed to me that they were singing their own hymn of worship, by moonlight, and the wind joined in with the leaves of the trees to add their voices to the melody. The hairs on my body stood on end, and for the first time in a long, long while, I felt a presence of something beyond myself and beyond human invention.

I stood there in my pyjamas, transfixed by the joy and the wonder being expressed by creation itself, until one of the night watch came upon me and asked me if I needed help.

Where do you even begin with that?

I mumbled something inane about enjoying the beauty of the moon and then stumbled back to my sleeping bag. In the morning, I woke, feeling a lot better than I had done, in so many ways. 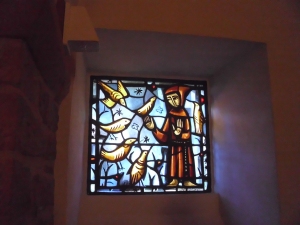 I could write a lot more, about the whole week, about things that happened and things that I saw and experienced. But the revelation for me is this: that when the living waters of the spirit seem lost, they may rise up in new places and in different ways, that I find a connection to the divine not in the human-made constructs or dogma or even symbols, but rather in the humble and the earth-born and the disregarded and the despised, and in the simple things like quiet fellowship, whether with a curious lizard or moth or with another human being. 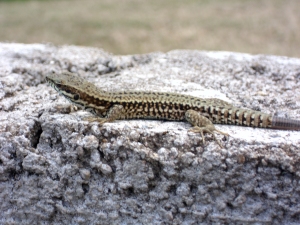