This is my entry into Shafali’s Story telling carnival; 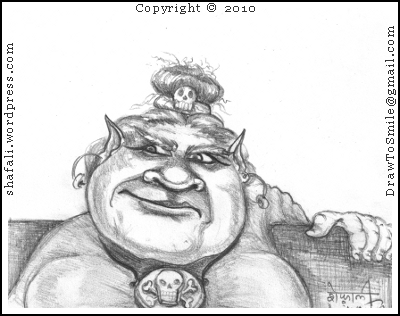 The director’s voice carried sharply over the clatter of the set and the cast seemed to slump at the word.

Most of the cast shuffled off in search of doughnuts, coffee and in at least one case, a double vodka, but Jemima stayed put, happily ensconced in the captain’s chair. Unwilling to leave a place it had taken her so long to reach, even for a much needed break, she shifted her posture and let her body relax. Her role required that she sit with ramrod straightness but the rigid plastic moulding of the chair meant her tail-bone would be rubbed raw if she didn’t shift a little. She considered asking for a cushion but it wasn’t something her character would use, so perhaps it would be refused.

It had taken so long to get here, in so many ways. So many miles, so many bitter disappointments and let-downs too. She would have graduated top of her class at stage school were it not for the prejudice of the tutors.

“To put it bluntly my dear,” said the principal. “For a woman, actual acting ability makes no odds at this age. It’s all about looks. And yours, well, what can I say?”

She had hidden her tears and soldiered onwards, taking on role after role that typecast her as ugly and evil. Often the only work she could find was as an extra in horror movies. Landing her first speaking part (and in “Lord of the Rings”, too) was a triumph; but it was tempered by the bitterness of knowing she’d so wanted to play an Elf, or a Hobbit at the least. The make-up girl had carelessly remarked she liked “doing” Jemima as she didn’t need quite so much make up or prosthetics to fit her for her role as Orc as many of the others did.

Of course it was only a matter of time before she moved into sci-fi. The beautiful bimbos who couldn’t act their way out of a paper bag would have brief and scantily clad roles and then vanished once their looks lost their freshness. But character actors like herself flourished as they just improved with age and experience. In this film, her character had sufficient screen time and lines to count as a major character and for the first time her name would be up their in the credits as Co-star. Hmmm….Co-staring Jemima Riddick. It sounded great to be up there with the big names and not lost in the small print at the tail end of the credits.

The make-up was itching and her prosthetic ears were burning her real ones; the glue was sometimes a serious irritant to sensitive skins like hers. But that was a small price to pay. Other roles had required that she shave her head and she’d been glad to be able to have her own hair and not even a wig for this one.

To tell the truth, she was amused at once again playing an evil villain. It was hysterically funny that human beings still equated beauty with goodness and ugliness with evil, or it might have been had not this misconception led to tragedy on grand scales. The witch hunts for example had claimed vast numbers of females whose only crime was to be old and unattractive. She was so glad she had not been here then; there had been progress of sorts in the intervening centuries.

In her last report she’d said so too, but had also added that it was still so far from the kind of world her people would ever wish to work with.

“Perhaps another five or so hundred years,” she’d written at the end.

In the meantime, she’d grown rather fond of this barbarous little planet and had elected to stay a little longer and see it progress. Her acting career was really starting to blossom and unlike her colleagues who’d worked here during the witch-hunt era she faced nothing worse that ridicule and obscurity if she failed completely.

One day these naked apes would grow up enough to understand that what was inside a person was what mattered, not the exterior, and in the meantime she intended to enjoy the many innocent pleasures this little planet offered. That included the art of film-making and she intended to make her mark on this world and show the folks back home what a gal from the wrong end of the nebula could do with a bit of time and patience, not to mention hard work and persistence.

Of course, she could have chosen a more pleasing exterior to start with; there had been plenty in the catalogue. It had been done many times in the past and humans had dubbed them angels or gods, worshipped them briefly and then more or less disregarded them. This way was longer and harder, for sure, but she and her people were in no real hurry. Unlike Penelope Cruz, she had all the time in the world; back home she was barely considered adult yet. It was very much the thing, doing a gap year working with the under-privileged and disadvantaged.

The cast were mooching back onto set and Jemima snapped her spine back to it’s correct stance and waited for the director’s orders.

Inwardly, Jemima smiled and twisted her face into its trademark scowl and started barking out orders to her crew. If only they knew how a starship was really run….! 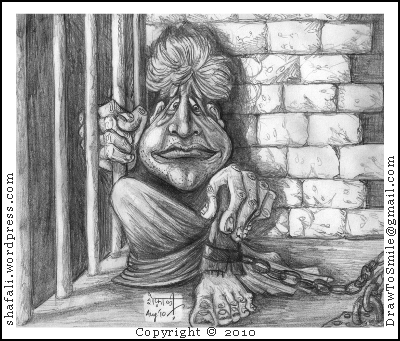 This story is my entry for Shafali’s wonderful blog carnival. Enjoy!

Like most things decided upon while half-cut, it had seemed like such a good idea. Gatecrashing his stepmother(to be)’s Hen party along with his mates really had seemed such a clever thing to do.

Adjusting the thin fabric under his bottom, he sighed and wished he’d not had that last pint. The chain around his ankle allowed him some movement but really he couldn’t get far enough away to have a pee without the risk of it leaking back to where he’d settled near the bars. The stone beneath him was, well stone cold and he could remember his grandma had always said that sitting on cold rocks would give him piles. However, if haemorrhoids were the worst and most lasting humiliation to come from this horrible night then he would count himself a lucky man.

He cringed to remember some of the things he’d yelled at the coterie of “mature ladies” who had been in the Hen group.

“I’ve seen better looking drag queens,” he’d jeered and failed utterly to register the sudden drop in temperature in the snug. “I reckon Boris Johnson would make a better woman than most of you.”

His stepmother(to be) had simply ignored him but had made a small gesture at Brenda, one of her friends, who, in his opinion, was the ugliest example of womanhood he’d ever seen and all of a sudden, he was seized by two of them. To his utter surprise he found they both had hands of steel and he was suddenly powerless.

“Well then,” said Brenda, “let’s see how well you scrub up then!”

He was lifted off his feet and in a frighteningly short time,they had transported him to Brenda’s house and he was stripped naked and was subjected to the severe torture of having pretty much every inch of skin waxed. His throat still hurt from yelling. Tied by tights to a chair, he was systematically made up and had his hair curled and fiddled with until he gave up protesting. The gang of dragons(as he now thought of them) just carried on regardless and finally, dressed him in a long pink evening gown, complete with matching pumps. The weird thing was that the pumps, supplied by Brenda, fitted his size 11s very well. But Brenda was a tall woman.

“Now, what shall we do with him, ladies?”

His heart froze and they picked him up and bundled him into a taxi, wrapped in a big blanket and covered his head. When they took it off, he realised he was in a dark place and that they were placing a shackle around his ankle.

Blinking in horror around him, he saw he was in a cage, and beyond it, only darkness.

“Enough’s enough ladies!” he pleaded. “You canna leave me here. It’s my Dad’s wedding tomorrow morning. I have to be there. Let me out, go on. I won’t say anything.”

But his pleas were unanswered and the laughing voices fade away leaving him in cold, silent darkness. That was hours ago now and he was desperate for a pee. He closed his eyes, hoping to drift off and lose himself in sleep. His dreams were haunted by visions of huge women with hands like navvie’s and Adam’s apples you could cut cheese with….

A security guard stood there and he could see now beyond his cage to the world beyond. Tableaux of unimaginable horrors surrounded him and he gazed stupidly at the guard.

“London Dungeon, lad. This is someone’s idea of a joke, no? Let’s get you out of there.”

“What time is it?” he demanded.

“Half past eight. We open at nine. You were lucky I had a look round before we let the public in,” said the guard.

It took a while to get him out of his chains and into some decent clothes. In the private toilets the staff used, he scrubbed at his face to try and get the make-up off but just made it smear worse than ever.

“Pan stick,” said the woman guard, when he came through in despair. “Heavy duty foundation used by people with very bad skin. Trannies use it.”

“I’m not a tranny,” he said. “Can anyone lend me a tenner? I have to get to my Dad’s wedding before it’s too late.”

The taxi ride seemed to take forever through the Saturday manic traffic and he knew it was too late. He reached the reception determined to find his Dad and set him straight but as he walked in the door, he knew the world would never, ever look the same again.

Sat at high table, resplendent with smiles were his father and his new stepmother. The groom wore a beautiful gown of pink silk, with matching roses and the bride wore a tuxedo in magenta with a rose-pink tie.

“Oh you made it then, son,” his father said, pushing at his wreath of roses. “I wondered what had happened to you.”

Swallowing, he came to the table and solemnly, like all good Englishmen, shook hands with his father. He nodded to the bride who raised her eyebrows in query.

“You’ve got eyes like piss-holes in the snow, son,” his father said. “Whatever did you get up to last night?”

“I drank too much,” he said, eyes still following his stepmother. “Slept in too late. Sorry. But I’m here now.”

edit: these are the other wonderful entries; go check them out!