Cut me and I’ll bleed green.

From the short sharp movements

Of winter’s economy, I move

Into languor and the lazier

I eat up the miles

Head in the clouds

(such as they are today)

And my eyes on the rising tide

Of butterflies and bumblebees

That have emerged from slumber

To mate, to forage and to live anew.

All last winter, through the misery of snow and ice and wind and rain, there huddled in a corner of my study window a small tortoiseshell butterfly, hibernating. I gave it dilute honey to drink and cherished its prescence in my room. Spring has come and the little butterfly didn’t fly. It had simply been too long a winter and it’s dead.

Walking today in the woods, I found myself buzzed by this butterfly, a different species, which came to me in total four times, until I got a decent photo of it. It’s not a small wood, but the same butterfly(I think) came to me four times. Four is a shamanically significant number, signalling truth.

The butterfly is a symbol in many cultures of transformation. My life is being transformed in so many ways right now. This little insect brought me hope through a hard winter and today brought me hope again that the creative impetus has not gone away and that beauty and truth and vision are still  part of me. 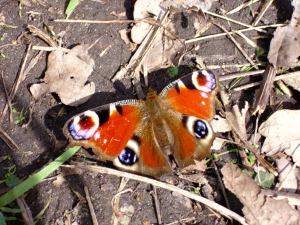 I had a somewhat odd thing happen today. I was chatting online with some I know only very slightly through the world of the internet and we had been talking at length of being works in progress, of being in the midst of personal transformation and metamorphosis.

I heard something in the room that made me leave the computer and go and look. Tiny wings were beating against the window pane; a small tortoiseshell butterfly had appeared as if from nowhere and was seeking to get out. Now the window in this room has not been opened for a while; it’s seldom used as a bedroom and to be quite honest, whenever any winged thing enters the house, be it moth, butterfly or otherwise, my cats tend to pursue it and kill it. I have no clue as to how the butterfly came to be there.

I do however count it as a sign, a message from above(or beyond) that the transformation process is nearing completion and I(and maybe my online friend) can soon find our true wings.

I let the butterfly out of the window and it flew away into the autumn sunshine.  It made me think of an episode I have read about where Freud and Jung had been discussing the various things and Jung had been describing a dream about a scarab beetle when a scratching was heard and a scarab type beetle appeared in the room. Neither could explain this, and Freud was silenced for once. Not long after this episode, they ceased to be friends.

The world is a truly magical and astounding place.