Devas, fairies, and the unseen worlds ~ why there are more things than we ever dream of

I’m a mass of contradictions, me. Like Lewis Caroll, I can believe ten impossible things before breakfast and not think it strange, and yet, some things I simply cannot accept. Of all the disciples of Jesus I most identify with, I think Thomas is the closest to my heart. Dear old Doubting Thomas, who demanded to put his hands in Christ’s wounds before he could fully believe in the resurrection. I’m like that; I have to experience certain things before I can accept them. So for all my scepticism, there are things that I believe in that mark me out as one of the fruit-loop brigade. I have enough crystals to set up a business, and while I cannot begin to explain why, I know that using them has had benefits for my health. You may dismiss it as placebo, or something as simple as appreciating them for their intrinsic beauty, but I’ve always found something uplifting, soothing, calming or energising about certain rocks. I can’t explain it, nor can I really justify it, and I’d be very hesitant about attempting to offer the kind of recommendations I see and hear of crystal healers giving. The complex pseudo-scientific rationales about how crystals work actually annoy me.

The same goes for stuff like fairies. I know damn well I must appear crazy to believe in the existence of otherworldly beings, Tinkerbells and the flower fairies, not to mention things like angels and elves, and dryads and the rest. And yet, crazy or not, I think they are real and on occasions interact with humans. I’ve seen and experienced things I cannot dismiss as tricks of the light, visual disturbances, psychotic hallucinations and the products of a vivid imagination.

But I still have no explanation for what these beings are, what they history is and where they come from. I could waffle on about many dimensions, space-time continuums, parallel universes and the like but it would be pointless. I just don’t know.

What I do know is that when I have aimed to work with these unseen beings, things flow in an almost magical way. Gardens bloom with greater vigour, and my home has had an atmosphere of welcome and kindness that people notice the moment they walk in. There is a school of thought that calls the beings that work with the natural world Devas, a Sanskrit word meaning shining ones and the depictions of them correspond to the occasional glimpses I have had. The Victorian idea of flower fairies being pretty winged children of minute size does somehow diminish them, in my view. Devas can be any size they choose to be; in fact I don’t think size has any meaning.

Isobel in Away With The Fairies found that the unseen beings around her became more insistent that she pay attention to them. In her isolated holiday cottage, where the modern world intruded less into her life, she was plagued by odd events. Doors refusing to stay closed, even unlocking themselves, small items of value vanishing and then reappearing where she’d looked ten times, strange fairy gifts of woven twigs and leaves appearing and disappearing; scary and unsettling sounds, electricity faltering and failing.  Her sense of self had been vanishing, her unique identity being eroded by the mundane grind of living a life that wasn’t fully authentic to her creative self. I’ve found the same. So I’ve decided to start paying more heed to them. That’s not to say you can cart me off to the funny farm just yet. In my defence, every year there are discoveries made that overturn previously cast-iron theories. Science is constantly obliged to re-evaluate itself. There are far more things in this amazing world of ours than we knew about even ten years ago. Who is to say that what we know in another ten years will not supersede even that?

My gift to myself this weekend, using hoarded birthday money was this pendant of a deva, in silver, to remind myself that there truly are things beyond imagining, and to re-connect with my own experiences of such things. I may be mad, but I think I am harmless. I’m going to start accepting that my experiences are real, and that there truly are other beings, composed of quite different material to us, dipping in and out of this world, and which wish to work with us and not against us. 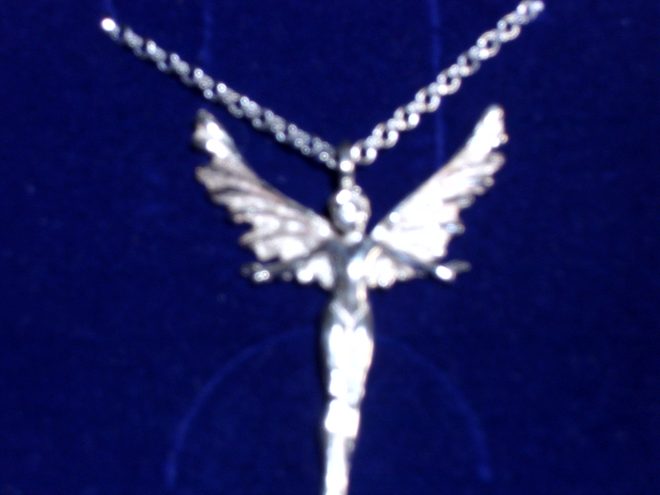