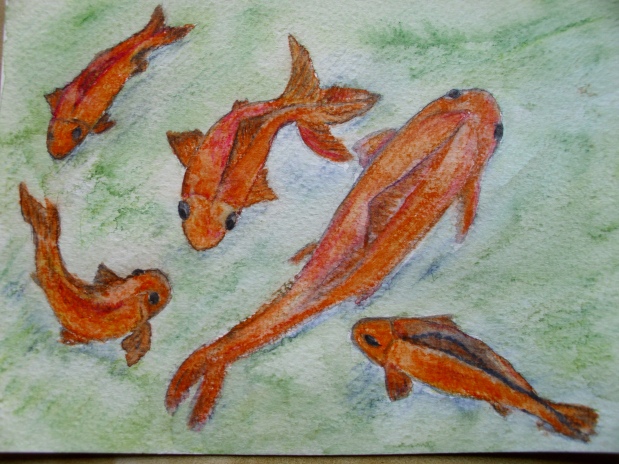 I’m lucky enough to have a large pond in our garden; we’ve never had a pond before we moved here and I’m not sure I’d do without one now. There’s something deeply attractive aesthetically as well as environmentally about a pond; the two are intertwined as the pond brings a lot of wildlife into our sights. My heart sings (albeit briefly and its own rather quirky out-of-tune song) to see flocks of goldfinches coming to bathe, and the many other denizens of our garden coming to drink, bathe or possibly admire their own reflections.

And there are fish. We’ve put in several batches of goldfish, because they are beautiful and graceful and to me, a symbol of the soul. At the weekend, I was gifted with a bucket of fish from an old colleague whose mother’s pond had become too crowded. There were a dozen fish in the bucket, mostly golden ones, some with fan-tails swishing out behind them like gauzy scarves in a breeze, and as well as one lemony fish, there were two green fish. Identical in form to the golden ones, these two vanished like ghosts into the deep green waters; their colour makes them hard to see unless you know they are there. When we feed them, the green ones rise with the others and gobble up their pond sticks, before vanishing again. They are, to all intents and purposes, invisible.

But I know they are there and I keep an eye out for them, feeling something resembling joy when I spot one amid their flashier, more in-yer-face comrades. It’s made me think of those humans who have become invisible fishes; there, yet ignored mostly, because they lack the bright colours that are deemed essential to being noticed and admired. I think that as I age, I am becoming an invisible fish too, becoming unnoticed whether in so-called real life and in the virtual world too. Humans are drawn by the bright, the new, the shiny, and by bling; we look for innovation in our lives, and are driven to seek it by the unconscious pressures of the media, of our peers and of our own desires to be popular and up-to-date.

Yet the good old things, whether art, or literature, or music, or simply people do not go away because we turn away from them to chase the new and shiny things. Like the invisible fish in my pond, they remain themselves, unseen and unheeded perhaps, but still what they always were. You just need to know they are there so you can keep an eye out for them. I’ve often listed writers here whose work has dropped out of favour, or which has never hit the heights of popularity it deserves but I’d be interested if those who read this would like to share artists, writers, musicians and others whose work they love but who have become (or have always been) invisible fish.

I walk along our stretch of beach a couple of times a week and have done in all weathers for the last three years. It’s never the same twice, and that’s why I love it. There’s hardly anyone there, often utterly deserted, or with a few fishermen with lines out to sea. Dogwalkers are often the only people you see and as the weather deepens into winter, only the really hardy venture out. The wind comes in off the North Sea tasting of Siberia and the waves are wild and high, even when there’s no storm.

It’s interesting to see what washes up or is thrown up but anything edible, from stranded fish to discarded sandwiches the fishermen leave behind is gobbled up by the ravening hordes of sea birds that patrol the shoreline incessantly. I’ve been seeking to find a photograph of a fish out of water, to illustrate a novel I wrote a few years ago but in the three years I’ve been here, I have never come across a stranded and unmutilated  fish. Apart from a few pipefish, which hardly look like fish at all, I’ve never seen a fish lying on the shore. I’ve found lobsters, and crabs and even a young seal but never an intact fish. Of course, I could always have found a photo somewhere, but that didn’t feel right.

Today in sunshine and brisk winds, I reached the shore and after  few moments, I saw it.  About six or eight inches long, black eyes staring sightlessly up at me, this discard from the fisherman nearby, lay a silvery fish. Cursing that for once I had forgotten my camera, I whipped out my phone and took a snap with that and as I bent closer, the lower jaw of the fish moved and I knew it wasn’t dead at all. I picked it up and put in carefully back in the sea and when nothing floated belly-up in the surf, I realised I had found it in time and it had swam away.

We use the term Fish Out Of Water when we mean we are out of our element, out of our true and natural setting and feeling uncomfortable about it. The truth of it is that a fish out of water is very soon a dead fish. Today, with so many things whirling round my mind, I had a sign that not only was I to be returned to my natural element and be revived but also that some of my plans are heading in the right direction. I can’t explain any more than this because there are so many other factors involved but this incident felt so very numinous and powerful beyond measure.

I think the fish might be quite pleased too….

Yesterday I wished I had brought my camera with me. We’d taken the dog to the beach and on the way back nipped in to the little nature reserve near the car park there. Now there’s been a lot of work done on this area and it’s looking like becoming a grand area for nature to get on with it, and some paths through to stop people trampling.

One of the nicest features is a large pond, almost a small lake, and to make things even nicer, a large bench has been constructed out of old railway sleepers so you can sit and enjoy the view over the pond. As we did so, my hsuband spotted something unusual in the water: goldfish! First one and then a whole shoal of bright flashing fish, clearly released from bowls and aquariums when they got too big. They were all a good six inches long and obviously thriving, and as we watched we saw something else, just below the surface of the water. A gigantic and utterly majestic carp shadowed his brighter cousins. This fish was massive, several feet long perhaps, and the goldfish seemed unperturbed by him. He seemed almost a guardian of his domestic relatives.

Now on a number of occasions I have dreamed of ponds, lakes and rivers, where first massive goldfish and then other fish of improbable or even impossible sizes have lazily swam just below the surface, often raising their mouths and tasting the air. I’ve never been sure what if anything these dreams mean, but it was peculiar to see a version of my dream played out in real life.

Like I said, I wished I’d had my camera with me.