All in a rush, Spring arrived and in our garden it came with enough frogs to almost walk across the pond. For a few weeks, there was a party in the pond, and each evening I went out to put food out for the returned hedgehogs, to hear the contented song of mating amphibians. I’ve always loved frogs; the metamorphosis from spawn to tadpole to froglet to full frog is mind-boggling. Tadpoles apparently can decide when they make the transition. If conditions aren’t right, they can remain a tadpole, getting bigger and bigger, until they mysteriously start to change into frogs. In many animistic traditions, frog is a being of significance too. According to one favourite site (http://www.animalspirits.com/index4.html) this is some of Frog’s attributes:

There’s plenty more information out there, though it does tend to repeat itself. Frog is a water totem, and connects strongly with emotion and cleansing, new starts and transformations.

On Friday, we had a delightful discovery. For a couple of months the garden has been visited daily by a female mallard duck, sometimes with and sometimes without her drake swain. We wondered whether she was the same duck who came last year with two half grown ducklings; on Friday morning she appeared as if from nowhere with thirteen fluffy little pom-poms. The likelihood is that she had a nest somewhere secluded in our garden and the ducklings were brand new, fresh from the egg. Ducks, too, have their medicine attributes:

The alignment of the two symbolic sets of meanings is striking, and with my own mystical aspirations, I cannot help but assign meaning to the apparent coincidence of our garden visitors, and begin to see a slow, but accelerating change in my internal world. 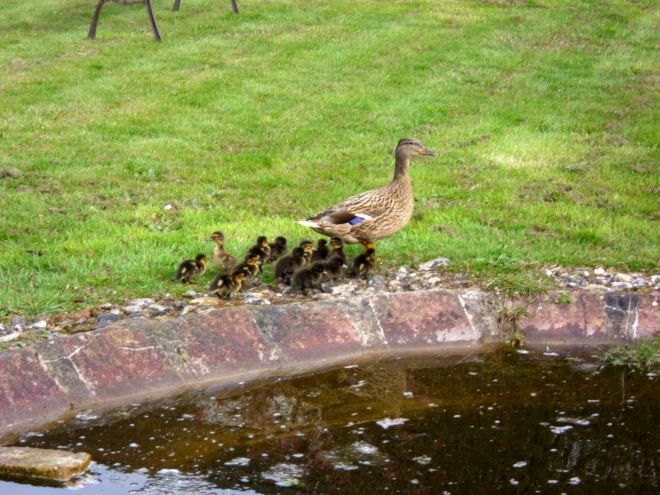 It’s finally Spring and a young frog’s thoughts turn to….

This obliging young frog waited patiently for me to get my camera out, snap him and wait to be thanked before he moved on.

It’s the little things in life that make you smile.

He wasn’t very big but he sure as heck made me grin….

I’ve often thought that the presents people chose to give you for birthdays and for Christmas are actually a very interesting way of understanding how they see you, and this kind of mirror is rather a useful one for helping to reassess who we are.

I’ll try and explain. My parents gave me practical gifts this year, two new messenger bags and a shawl, and this reflects how they view me as a practical woman, living a busy life. It’s not strictly true as it’s only a small part of it, but it’s nonetheless a comforting feeling to know they subconsciously view me as able to take care of myself. The shawl is a caring touch, soft and warm and cosy, but also very practical; there are no threads  to get caught on cat claws and ruin the whole shawl.

My husband gave me a rock I had admired in a shop while we were out together months back. It’s a septarian nodule, often referred to as a dragon’s stone, and is a composite stone of several other minerals, calcite, aragonite and limestone. It’s polished and very smooth and extremely beautiful. I collect rocks; minerals, beach pebbles and crystals alike. I have some belief in the powers of crystals but a great deal of love for the beauty both visual and sensual they show. He also found me a CD of music, sacred Hindi chants mixed with the sounds of the waters at Chalice Well in Glastonbury. It’s one of the most lovely places in England and one of my utter favourites. The music was being played in a favourite shop, but as ti was a demo edition and wasn’t yet on sale I was unable to buy it at the time. He sneaked back while I was busy elsewhere and persuaded the shopkeeper (a friendly acquaintance of many years standing) to let him buy it for me. These gifts show his understanding of my loves of beauty and the sacred. I’ve looked up Septarian in some of the many directories online of “crystal meanings” and if you believe in that sort of thing, it seems appropriate that this unusual stone came to me right now.

One dear friend gave me a musical frog carved of wood; you run a stick along the ridges of its back and it makes a kind of croaking sound. According to Native American thought, my birthdate means I belong to the elemental clan of the frog; I suspect she doesn’t consciously know this but does know my love of unuusal artefacts and percussion instruments. It’s also probably Fair Trade, something I support when I can. A second dear friend also gave me a frog as a part of a gift made up of some incense cones and a windchime; the frog was the ceramic holder for the cones to sit in when being burned. It cannot be a coincidence that two people gave me frogs; I have a great affinity with them too. On a rare visit to the Friends Meeting House in Beccles, I surprised several of the Quakers I was talking with when I bent down to the surface of the little pond in the Meeting House garden and called a frog which proceeded to jump into the palm of my hand. I think they maybe think of me as the frog lady now!

My brother’s gift was a jacket, knitted in a rainbow lined with fleece and with a hood; it too is Fair Trade. I love the rainbow and have hat, gloves and even bootlaces but never something quite so big a statement as a jacket. It’s very bright and very vivid and impossible to ignore. It’s started people talking to me, to admire it. For me this gift shows that despite our profound differences in character and attitude in life, my brother has some real understanding of the person I am, and that whatever I felt when we were children, he does actually love me.

I had some lovely cards sent as well as some e-cards, and while it was a low key birthday, I felt cherished and cared for.

The gift that brought a lot of questions with it was from my daughter. She found for me the most beautiful silver Caduceus. If you are not familiar with this symbol it’s the symbol used by a number of health authorities; it’s usually depicted as a staff with wings and two snakes twining round it climbing it. This is sometimes referred to as the staff of Hermes, or of Ascelpius and is a powerful symbol used by healers.

It made me rethink my role as a healer. I did work as a healer once, using a form of massage as my medium but to be honest I was glad to let that go when we moved here. There are too many people out there who claim to be healers in some way and sadly so many of them are deluded and many delude others. I was not one of them; I knew the limitations of the modality I worked with and felt uncomfortable if people expected more.

But on a number of occasions over my whole adult life, I have laid hands on people and something beyond me has happened. Healing has occurred. It’s not me that does it, it’s as if something comes through me. It’s never been something I can turn on or off at will; it just sometimes happens. I’ve tried to leave that part of myself in the past because it brings up far too many questions that I can’t begin to answer and have become weary of asking. But my daughter has not forgotten and her gift to me has asked that I look again at myself as healer.

Perhaps I should do just that.