What goes around, comes around ~ compost, Karma and kindness

One of the hardest things about moving house is leaving behind a garden you have nurtured and cherished. I used to be a gardener. I am still one inside, but after our last move, from one garden that was far too big (an acre, if you’re curious) to one that was far too small, I lost heart. I found I just couldn’t do it any more. The garden was tiny and the soil exhausted and slightly toxic from overuse in the past of both weed-killer and chemical fertilizers. Turn a spade and nothing wriggled. We tended it but for me it was without enthusiasm.

But diligently we filled our two remaining composters, with teabags, veg peelings and the like. Our garden in Kegworth, we’d had a row of six Daleks and when we left, I gave 4 of them away to a freecycler who also filled some sacks with the beautiful well-rotted compost those Daleks had contained. This year, the composter in use was a glorious mass of wriggly soil workers: hundreds upon hundreds of worms.

So of course, the move became more than speculation, became a reality and it dawned on me that for the umpteenth time, I’d be leaving behind perfect compost. We dug that batch into the veg patch. If nothing else we’d restored that small patch of earth to something like a fertile, healthy soil.

Moving house is up there in the top ten stresses. I’d fretted myself almost into a breakdown by the time moving day came, paralysed by sheer anxiety into a state resembling a rabbit in the headlights. No amount of reassurance made a difference. I’ve been ambivalent about this move for lots of reasons; I suspect some of it is based on deep distrust of the bureaucracy the church can be infamous for, and also because it meant that a certain level of independence would be lost. But sometimes you just have to go where the Wind blows you, and in the end, I let go and just allowed myself to be borne away on that Wind.

I’ve just about emerged from walls of boxes now. Apart from my study most of the boxes are unpacked and the house feels like home. It doesn’t quite smell like home yet but I am working on that. The acid test is when my mum arrives next week and walks in the front door and takes a big sniff. I’ll let you know what she says.

In the first few days, I worked solidly at unpacking but one evening my other half told me something that was a pleasant surprise. There’s an area behind the garage that’s what you might call a ‘service area’ with a compost bin and such like behind a trellis fence. It turns out that there’s a compost heap too. It’s about twelve feet long and about five deep, and 3 feet high. There must be a good metric tonne of well rotted compost here. I suspect that this is about the same as all the compost I’ve left behind in the last twenty years.

There are also a dozen or so apple trees. In the last gardens I have planted dozens of trees (literally) and I don’t think when it comes to apples, I’ve ever stayed long enough to ever taste a single one. We once grew asparagus from seed; by the time we left that garden, it was getting close to being ready to crop. We never got to eat any.

Many years ago, when we had our first garden, a friend asked me why I was bothering to plant things when we knew we’d only be there for three years. At the time I answered somewhat acerbically that what was the point in doing anything when we’re only on this planet for perhaps eighty or so years. The thing is, planting trees that one will never live to see in their prime is a selfless act. One is planting for a future generation, never for oneself. If no one did it, imagine the world in fifty years time.

So seeing both copious compost and abundant apples in my new garden was a reminder that sometimes things do catch up with us. The good we do, and the bad. When you sow kindness, it’s because it’s the right thing to do, and not because you hope that kindness will be repaid one day. It won’t be. Kindness is a gift, once given, and given with no thought of return, which benefits the receiver first. But the giver benefits too, from simply doing a kind thing. Yet at times I wonder if there is some rough balance that means you tend to get back what you have freely given. I don’t believe in the so-called Law of Attraction at all, yet I do believe in grace. You don’t have to deserve it, yet perhaps when we have chosen to do good and be kind, grace finds it easier to find us. Maybe you just notice it more.

I tend to (wrongly) associate the word Karma with the negative, of punishment rather than a redressing of balance, but the principle still seems to be there. The evil we do does come back to roost, in the end. Our problems come when we wish to see the evil of others catch them up when and where we can see if and feel that justice has been done. I’m guilty of this at times, of wanting those who have chosen to hurt me to get their come-uppance and for me to know about it. That’s something I have to let go of. It’s not up to me.

There’s lots of work to do, to make my new home more home-like and to nurture and cherish the new garden, and find a job and so on. But now I am here, I’ve generally slept better (that’s another post!) and feel better. I’ve begun to understand where some of the extreme anxiety had been coming from (again, another post). But the Wind has blown me here, and here I have landed. Time to see what else the Wind may bring.

My most recent trip brought home to me in a number of ways how much of an impression we can make as individuals on the world and how easy it is to underestimate the impact our actions and inactions can have on others, even people whom we have had no direct contact with.

Coming through border control at Calais our coach was detained because while we had been parked up on a shopping trip illegal immigrants had climbed under the coach and were clinging to the underside of the vehicle. Now this was quite dramatic in itself but I’d rather pass swiftly on. The officials were marvellous and while we waited, they brought refreshments and reassurance to our group. I stood in the sunshine for a while talking with one officer and as I did so, a glint of metal caught my eye. On the ground by my feet was a small silver holy medal. I showed it to the officer and after some
discussion she told me to keep it as it might have been there for
months. It might well have been.

Some unknown person had dropped that little medal and had lost it forever. I have no way of ever finding the owner so I have kept it, as a reminder of our connection with those we never meet. A forensic
scientist would tell you that everywhere we go, we always leave a
tiny physical trace of ourselves: hair, skin cells, fibres from
clothing, fingerprints. We can never merely observe something, we always make some contribution, however tiny. This is also true of our non-physical actions. Each act we do, has consequences we will never see. Some are bad: the careless words that hurt the feelings of others, the distant issues of what we buy and where it is made, our car use and so on.  These are things that damage without us knowing we have caused harm;often simply by products of being alive and being human. The greater harms we cause in life, the hearts we break and the damage to the environment are often wrought through a mixture of ignorance and sheer blind selfishness.

But what about the good we do that we never know? How often do you find out later that your kind words have meant the world to someone who was thirsting to have some goodness and gentleness extended to them instead of harshness and cruelty? The things we teach our children need to include kindness and consideration for the feelings and well-being of others: we live in an increasingly me-focussed society where selflessness is seldom encountered and the dog-eat-dog model is followed ruthlessly.

It’s far from a perfect world. I’m far from perfect as a human being; some days I think I am a wretched specimen, falling so far from my aims. But aim high and while you might miss the stars you may still land on the moon, is a saying I sometimes think of. It’s not about being perfect but about trying the hardest to ensure that the harm you do is outweighed by the good.

Remembering that we are all connected, some say by only six degrees of connection, is a way of reminding yourself that you are never truly alone. The good you do will return to you, as will the harm. I’m not a believer in the full concept of Karma, but I do believe that somewhere along the line, we tend to get what we deserve.

Someone, somewhere in the world lost a small but obviously cherished medal. I cannot return it to them physically but what I can do is offer prayers for that unknown soul, wherever they are. And perhaps others elsewhere may be doing the same for me, remembering me as the person who helped them, however briefly, or simply as one of millions who have supported a cause like UNICEF, or as, I hope, a dear friend who has meant a lot to their life.

After all, Hope was the last thing left in Pandora’s box, and has been the finest of human allies ever since. 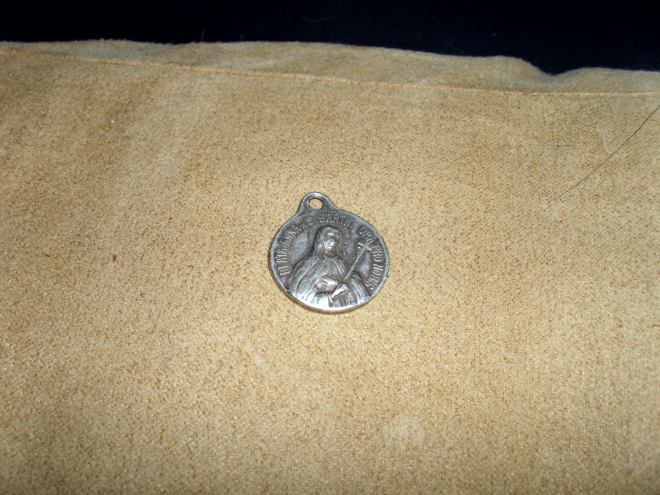